mind the fingers and toes...

hubby's not invisible so parts of him show when holding up finished quilts. At least until I get my medium quilt holder up on the wall. It needs a coat of polyurethane to protect the quilt from the stain. Anywho... 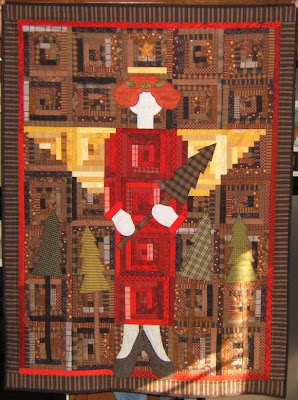 I swear I know that meandering is boring...but it's also F*A*S*T! I feel like I've been quilting for days. Mostly I just did in the ditch quilting and then I crossed all the brown blocks. She's all ready for the wall in November. I've been working nights doing the Christmas Elf stitchery too and it's almost done. A few more nights and then the piecing to do. My Christmas List of projects is getting smaller and smaller!

I discovered a few very cool tools for quilting yesterday. Roxanne's Basting Glue and MaryEllen's Best Press! Two years ago at the quilt show I bought a tiny bottle of basting glue to try out. 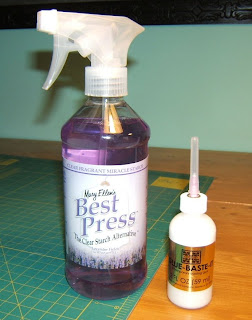 Never cracked it, but last February I bought a big bottle. yesterday while I was placing a few dresdens on backgrounds I thought about that glue. Pins didn't suit, so what the heck. I popped it out, spun on the tiny needle like tip and started gluing. Man o Man is this stuff fantastic! Tiny drops and my dresdens are all placed on the background ready for sewing and NO pins to mess with at all. Washes out too.

The Mary Ellen's is the most fabulous stuff for ironing. Stubborn creases come out like magic with this stuff. Get some if you run across it, you won't be sorry. 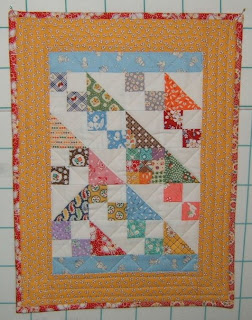 Now lastly, I'm sure you've read before that we have been doing a swap with Carol, Darlene, Sharon, Wendy and I. We all shipped out some cool presents along with our last package of blocks. These were my presents...well one of them. I made small quilts out of the scraps and some extra bits for everybody. This is mine. I added an extra 9 patch to mine...along with that backwards hst. The 9 patch was on purpose...the backwards placement was NOT! Oh well. Not ripping out stuff after sewing. Not on mine.

I also sent all the gals lime green notes cards that had their initials on the front.

Tomorrow I'll show the new quilt ladder I got at a local shop!
Posted by Judy at 5:37 PM

Your angel turned out awesome and you are fast...I think I've said that before. The little quilt is so cute and the backwards hst adds charm.

I love this angel
I just am amazed how fast you made this quilt.
Love the brown fabrics you used in the blocks...
nice collection of fabrics :)
Kathie

Love your angel...Mary Ellen's is probably my favorite find of the past year. Your little quilt is as cute as can be...I love mine!

You sure must have worked steadily on that angel. She turned out perfect and for not having the original pattern you did fantastic! Instead of Roxanne's I use a small amount of Elmer's. It is less expensive. You can purchase smaller tipped containers at craft shops similiar to Roxanne's. I'm able to dab a small amount of Elmers, iron it dry and wash it out easily. I've seen the pressing stuff but hadn't tried it....might just need to do that now after hearing how well it works. Your little quilt (almost forgot to mention)is perfect even if you think the HST's aren't. I love that little 9-patch in it!

The angel quilt is beautiful!

The quilt turned out beautifully. Great job.What I like about meandering is that is hides in the background and you take stock in the rest of the quilt.

I love your little quilt but I love mine too!!!!! Thank you!!! I will treasure it always. And your angel quilt is wonderful!

Your angel quilt is beautifaul - what a great idea!

I love how your angel turned out!! So cute. And what lucky swap partners you have that little quilt is adorable!

I love the angle, I think I'll try one for next year if you don't mind me coping your idea. I'd like to add your blog to my list, if this is not ok, let me know and I'll remove it.

Other Pages and Tutorials